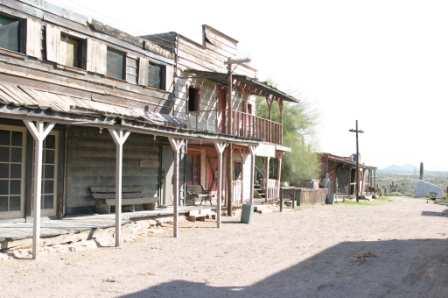 Cowtown was built in the seventies by Ron Nix, a Hollywood stuntman who moved to Arizona with his wife and a dream to create a real old west atmosphere, somthin’ like Old Tucson I guess.

Anyway, he brought a lot with him – teaching stuntmen, havin’ rodeo, letting his students perform in the public eye, encouraging’ Civil War reenactment and completin’ a town which served as the basic set for a lot of movies. The reenactments sort of opened the door for cowboy action shootin’ which is where our club comes in.

Back in those days a bunch of guys and gals got together in the desert every Sunday morning for shootin’ and experimented with targets, scenarios and all of that stuff and had a hoot doin’ it. Finally, they came up with the idea of formin’ a club and, although not the first of the cowboy shootin’ groups, in 1982 they became the first organized Cowboy Action Club and established and incorporated safety guidelines which SASS, who actually came into being somewhat later, has put into place for world wide expansion of the sport.

Through the efforts of Jim Martin and Bill Waller, a couple of the members, who were friends of Ron Nix, the Cowtown Shooters were invited to become part of the town and added greatly to it’s ambiance strollin’ around in their period clothing, shootin’ irons and general camaraderie. And then in 1981 the Club held the First Actual Arizona State Championship of Cowboy Shooting. Cowtown prospered for a while, but Nix’s dream never reached full fruition and the town changed hands many times.

Today it, along with the surrounding area serves as “Firebase Phoenix”, a privately owned educational program in modern weapons and their proper use and has been used to train snipers for the armed forces. The shooters group, similarly, has experienced many changes. However, due to the dedication of a few of the originators, this club still lives on.

The original name is gone and the club now bears the name of the Cowtown Cowboy Shooters who shoot at the place which the name appears on the Fort Gate – FORT SNOW of the ARIZONA TERRITORY. The area was officially named a few years ago by the group in full army uniform and ceremony after Don Snow.

Don was one of the originators who became ill with eventual inability to work at “a job”. Thus, from 1993 until his death in December of 2000, he made Cowtown literally his life and it is for his often heroic efforts that the original concept still exists. His motto was: “If it ain’t fun, it ain’t worth doin’.”

He never lost sight of keeping safety always first, but still maintaining the fun and seeing the smiles on peoples’ faces knowing they had a good time. He knew that many would come here and move on, but believed that this was good because they had developed. However, he believed that Cowtown would draw them back because of the wonderful posses which welcome new shooters and help them to become part of the cowboy family and really enjoy the sport. 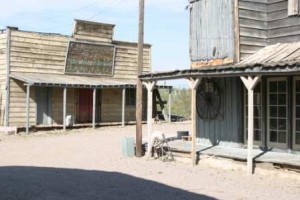